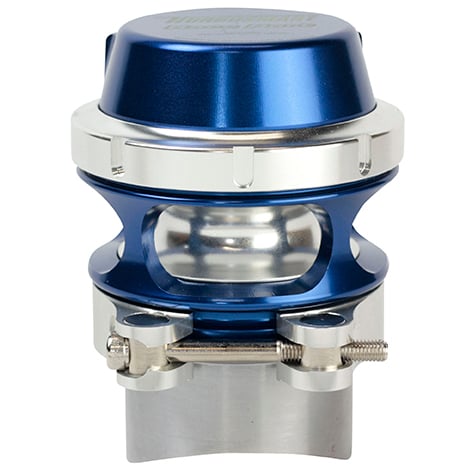 With the thrust bearing worn excessively, this turbine wheel contacted the turbine housing causing failure. The damage happened on the track, but the wear happened on the street.

How It Works is a series designed to dive deep into a part and really explain the nuts and bolts behind how something works. We’ll try to touch on some of the physics behind the functionality, but not go “so in-depth” that you need an engineering degree to understand. We decided to kick off our Diesel Army How It Works series with a relatively misunderstood and under utilized part, the blow off valve (BOV).

In the never ending quest to achieve better low-end performance while not losing mid or top-end power, turbocharger manufacturers are developing new technologies to get boost much quicker while not losing top-end flow. This is great for customers because it usually results in more low-end torque, better fuel economy and great top-end horsepower. Unfortunately, too much of a good thing can be an issue. For anyone who has been driving a newer diesel (or a modified one) and suddenly let off the throttle, you have probably heard the all to familiar chuw-chuw-chuw-chuw (surge) sound.

That noise is coming from the turbocharger as the turbocharger is exhaust driven. As long as there is a ratio of slightly less-to-more drive (back) pressure than boost, the turbocharger continues to produce boost and everything hopefully runs smoothly. When the throttle is let off suddenly, the drive pressure goes away almost instantly.

This means there is more boost than drive pressure, resulting in a negative relationship. So suddenly, all of that pressurized air (from the intake valves through the Charge Air Cooler (CAC) tubing and intercooler) is no longer being forced through the engine and is free to go wherever it can to return to atmospheric pressure.

The pressurized air will enter the cylinders like normal – but, if the engine can’t swallow the air fast enough – it can also go back through the turbocharger. With very little drive pressure forcing the compressor wheel to spin; it doesn’t take much for the pressurized air to reverse spin the turbo for a split second to escape out the inlet. Surge wears the thrust bearings of a turbocharger out pre-maturely, causing early failure either through leaky seals or catastrophic failure (i.e. parts decide to start flying around, no longer being attached).

How do you prevent this? Well, the simplest way is to let off the throttle more easily. Gently letting off the throttle allows the boost/drive pressure to reduce evenly. While that sounds easy to do, in reality, it isn’t always that easy. When driving on the street, there really isn’t a way to control the vehicle in front of you or even predict when something is going to happen. For competition vehicles that use highly modified turbochargers, surge is almost always a fact of life. If letting off the throttle gently isn’t always an option, what else can you do? Enter the Blow Off Valve (BOV).

The BOV is a device that releases boost pressure between the turbo and the engine (or throttle body in gas fueled applications), thus alleviating the “surge” phenomenon. The BOV generally has four main parts.

A: Mating flange – This part is usually welded to the CAC tube. Note the O-Ring groove to help seal the mating surfaces (labeled A.1).

B: Main Body – The main body houses all of the moving parts as well as bolts/clamps to the mating flange. At the top, there is a port for manifold air to be applied (boost or vacuum – labeled B.1).

C: Actuator Piston – The actuator piston holds the pressure in, until it is allowed to move which releases the pressure out the side of the main body.

How Does It Work?

If the spring on top of the actuator piston was enough to hold all of the boost, all of the time, then the BOV would never work. There would be too much pressure holding down the actuator for it to ever open.

Yes, the most common application of a BOV is on gasoline engines. This is because a gasoline engine uses a throttle body to regulate the amount of air going in. When the throttle body is closed (causing a vacuum in the intake manifold – FM becomes negative) there is no where for the boosted air to go, except back through the charger.

Surge is also a major issue with gasoline engines. This is the reason that 95 percent of turbocharged systems installed on gasoline engines run BOVs or BPVs (bypass valve is basically the same thing as a BOV except the air is released back into the intake pre-turbo as opposed to releasing to the atmosphere like a BOV). The damage caused to the turbocharger would become too great in a relatively short period of time.

There are also other benefits to running a BOV. By allowing the pressurized air to escape, the turbocharger doesn’t have the same resistance to spinning and will actually come back to full boost much quicker during shifts and rapid rpm changes (like revving the engine).

BOVs Are For Gasoline Engines, Right?

That is all fine and dandy, but a diesel doesn’t have a throttle body and on its own, doesn’t produce a vacuum. This means that FM always equals FB. So, the actuator piston stays shut (FS is constant at rest). Now, how do you get a BOV to work properly with a diesel? Thanks to companies like TurboSmart, it isn’t that difficult. The basic principles of the BOV are constant (FS + FM greater than or less than FB). To achieve opening the gate, FM needs to go to zero. So how is that accomplished under boost you ask?

In principle, that’s easy to do. All you need are a few parts like a solenoid, three-way valve, a few fittings, and some vacuum hose and you’re good to go, right? Not quite. Something still needs to tell the solenoid when to shut off and when to open. Here is where aftermarket companies like TurboSmart come in to play. They have created a module to sense the driving environment and when it’s necessary to energize the solenoid.

How do they sense the driving environment? First off, TurboSmart did a tremendous amount of testing to learn when the BOV is actually needed. They tested on everything from fleet vehicles to hardcore full-competition vehicles. With all of their testing data in hand, they decided they could do everything needed using the throttle position sensor.

The module is able to determine if the driver is asking for more power, constant power, or no power simply by how fast or slow the pedal is being moved. Then through extensive calibrations (done during initial testing), it determines if there is going to be surge issues or not. If so, then it energizes the solenoid and the driver hears the familiar “CH” of the pressure escaping the intake.

The basic principles of a BOV are the same for a gasoline and diesel engines, the difference is that a diesel system needs some electronics to work properly. With either setup, the most challenging part of the installation is welding the mating flange onto the CAC.

Who can benefit from a BOV setup? The simplest way to answer that is anyone who can surge their turbo (basically anyone who drives a VGT truck or has an aftermarket charger). If you are reading this, then odds are that you can probably benefit from installing a BOV.

Stay tuned as we bring you next month’s How It Works taking a deep-dive into one component at a time. If you have a suggestion on what we should feature in the next How It Works article, leave your comments below.

New Ranger Will Make It To The States With Three Diesel Options!