When Jeremy Schmidt started having issues with his second 6.0-liter Power Stroke engine at around 200,000 miles, he contemplated doing a Cummins swap. Ultimately, he decided to stick with the Power Stroke for another round. When he hit 320,000 miles and started having issues once again, he knew it was time for a change. Schmidt uses his truck every day, and keeping it running and producing money is vital. When he was told the engine would need to be pulled and mostly disassembled to be fixed, he pulled the trigger and decided to stuff a 2004 5.9 Cummins under the hood. 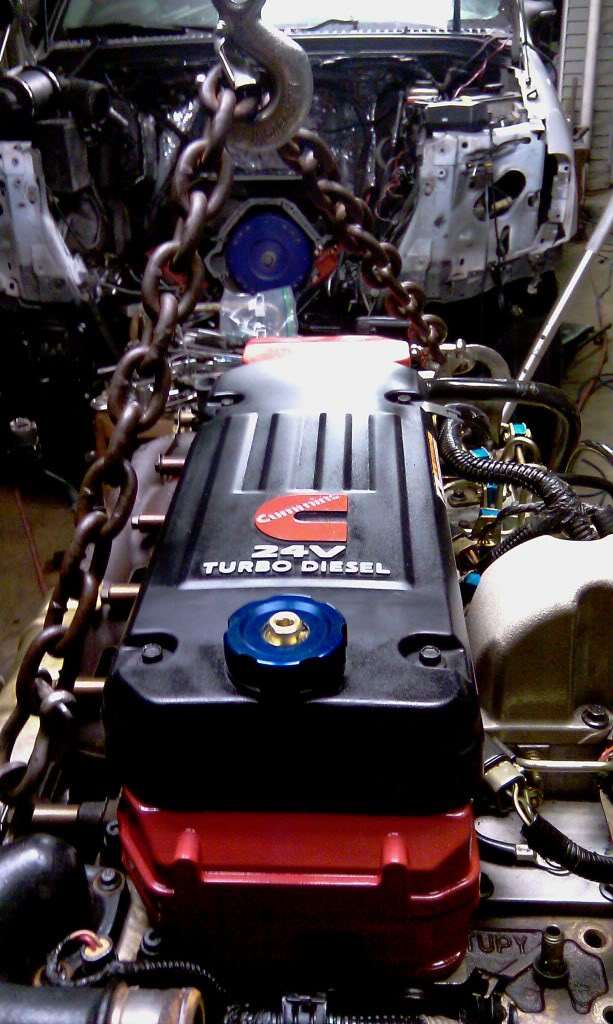 “The truck is perfect for what I want it to do. It was actually cheaper to do the swap than to go out and purchase a 40, 50, or 60 thousand dollar vehicle. It was a big decision to do the swap. I also had to stay in business. What can I do to make my business more viable, is why I did the swap,” says Schmidt.

With the inherent problems many experience with the 6.0-liter Power Strokes, some look for an alternative. Most opt to use a Cummins engine as they are extremely reliable, fairly common, already street legal (in many states it is illegal to use an agriculture engine in a street vehicle) and there are quite a few companies dedicated to producing parts and supporting people who make the swap. Schmidt decided to do the swap himself and documented as much of the process as he could. If you frequent Cumminsforum.com, you may have already seen his thread. As of the time we published this article, the thread is 32 pages with over 376 posts. In addition to the initial build, he has also documented the experiences he has had after living with the swap for two years now, as well as the continued upgrades he has made.

“It was my intention to make everything appear and work as fluid as factory. It’s an ongoing project, I like to try and improve things,” says Schmidt. “Actually putting the engine into the truck was easy. You can buy motor mounts and power steering pump bracket to reuse the Ford stuff, but other than that, it is basically like Ford wanted the motor to be in the truck. The wiring part is the frustrating part,” Schmidt continues. Schmidt started out with a pretty impressive list of parts. He was shooting for a useable 550 horsepower setup. So, the truck features upgrades like compound turbos from BD Diesel Performance, valvesprings and pushrods from Hamilton Cams, Destroked adapter and flexplate, and many more.

For many of us who have looked into doing a swap like this, Schmidt has also documented the transmission issues he encountered in trying to keep the 5R110. While this is an incredible transmission, the way it works is quite complicated, and tuning the stand-alone controller is a challenge. “It [the 5R110] had a problem with the line pressure being too high. What ended up happening was, that it grabbed the snout of the torque converter and chewed it up. It stalled the engine when I was exiting the off ramp. I decided to just simplify everything and went with the NV5600,” says Schmidt. The NV5600 is the six-speed manual transmission behind 5.9 Cummins engines from the factory. “The ultimate goal is to go with an Allison six-speed. I think with the Allison and the 4.10 gear in the back will be the ultimate way to go,” continues Schmidt.

Schmidt now has over 100,000 miles on the conversion and outside of doing regular maintenance and upgrades, he hasn’t had to touch the engine at all. Schmidt, says that even though it doesn’t look like it, it’s right at 39,000 gross in this pic.

We asked Schmidt… What would you tell people that are on the fence?

“It is 100 percent worth it if you have the time, money, and the will to actually complete the project. It is worth it in the sense that you will have a vehicle that is like nobody else’s. Even though there are hundreds of other Ford/Cummins conversions out there, each one of them is unique in its own aspect. I would go for it. If I was pulling out a 7.3 or 6.0 and had an option to put anything from a 12 valve on up to a 6.7. I would do as much research as you can, read the forums, talk to people, ask questions, ask questions, and ask questions. You are the ultimate decider on what happens to your truck,” said Schmidt.

One thing that did come up during our conversation is that even though Schmidt did the majority of the conversion himself, he owes a big thanks to his friends. He was quick to point out the things that they did, like building a custom fan shroud that played a big role in the final look and feel. If you have any questions or want to know more info, hit up the forums and start asking questions. As we mentioned earlier, you can see Schmidt’s thread on Cumminsforum.com.